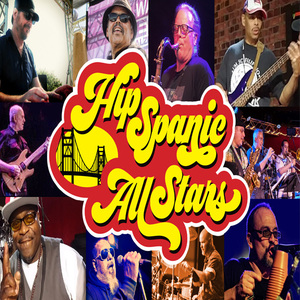 "Celebrating The Spirit Of The Mission District"

The San Francisco music scene has historically been a hotbed for many creative styles of music, often blending the cultural sounds of its varied population. The city’s Latino flavored Mission District is an especially fertile part of this phenomenon. The Hip Spanic AllStars were ...

born out of this neighborhood in 2010, the product of a musical collaboration involving longtime friends and residents of the Mission, Happy Sanchez, Karl Perazzo (Santana), Norbert Stachel and Mic Gillette (Tower of Power), Dave Shul (Michael Franti and Spearhead) and Jay Lane (Primus). They all drew from their shared experiences to create an amazing blend of Latin, Jazz, Funk and World Music - mixing it all together into a melodic and rhythmic gumbo. They called their debut album "JazzyAfroLatinFunk" and named their band the Hip Spanic Allstars.

The group’s roots are derived from the 1970s Chicano rock and funk scene that brought us Santana, War and Tower of Power - classic bands that crossed cultural borders as well as musical ones. Now 7 years later, the unit that had been primarily a studio entity has finally come together to perform live! The band’s debut performance was a high-energy set at the 2017 Fillmore Street Jazz festival that Jason Olaine, the festival’s Talent Coordinator described as “Killing It!”

It’s a warm night on Mission Street. Going low and slow, cars cruise by the crowded sidewalks, as people hang out, check each other out, tease and flirt. The soundtrack of it all, old soul, salsa, R&B tracks, drifts over the street. It’s the scene set by the Hip Spanic Allstars’ “Crystal Blue Persuasion,” an anthem for the low rider scene and a soul-drenched...

It’s a warm night on Mission Street. Going low and slow, cars cruise by the crowded sidewalks, as people hang out, check each other out, tease and flirt. The soundtrack of it all, old soul, salsa, R&B tracks, drifts over the street. It’s the scene set by the Hip Spanic Allstars’ “Crystal Blue Persuasion,” an anthem for the low rider scene and a soul-drenched celebration of a time and place where Latin, soul, and funk collided.

This is also the place, the culture where the Hip Spanic Allstars come from: San Francisco’s Mission District, the same fertile ground that gave us Santana and Sly and the Family Stone. The Hip Spanic Allstars can do it all--from Latin jazz, to salsa, to rock and roll, they stir it all and more together on their latest album, Old-School Revolution (release date: October 26, 2018).

“We grew up in the era of the big funk groups, and they all had horns. A lot of those guys are not Latino, but it really resonated with the community. That was where we drew our roots,” exclaims Happy Sanchez, the driving force behind the Allstars. “The Bay Area always had a strong Latin and Tropical scene, and it’s a formula we’ve stuck to, year in, year out.”

As for the revolution, “We’re bringing back the old sound of harmonizing together, of drums and horns and Chicano grooves and funk,” laughs Sanchez. “That’s the old-school revolution. It’s an authentic, true sound from the US. These grooves make America great again.”

The musical careers of the members of Hip Spanic Allstars have been long and extremely successful. Last year, the Hip Spanic Allstars song “El Borracho” was featured in the John Leguizamo movie 11:55.  Most recently, members Karl Perazzo and Happy Sanchez formed the Latin Soul Syndicate, doing soundtrack work for such blockbusters as The Sopranos, The Devil Wears Prada, The Ugly Truth, and 99 Homes.

But they’ve had skin in the game much longer than that. Some of the Allstars first started playing together in their mid-teens, as part of community center salsa bands around the Mission. Navarro brought together Sanchez, Perazzo, and several other future Allstars as the teenaged players joined his salsa group, Sangre Nueva. “We would play at clubs all over the Bay Area,” says Sanchez.

After kicking around the salsa scene, Sanchez got together with Shorty Ramos and Victor Castro to try something different, forming Los Mocosos--Spanish for rascals, troublemakers, snot-nosed kids. Releasing their debut on Six Degrees Records in 1998, Los Mocosos became a mainstay of the West Coast scene. Madly mixing Latin pop, ska, and rock, Los Mocosos enjoyed a dedicated cult following. Twenty years later, the trio have come together once again, merging the cores of Los Mocosos and the Latin Soul Syndicate to form the Hip Spanic Allstars.

You can hear the friendship. The cut “Welcome Back”--a unique mixture of Latin and Zydeco music, perhaps the first of its kind--was written by Ramos. Half Puerto Rican and half Hawaiian, much of Ramos’ family was involved with the Sons of Hawaii, a San Francisco Biker gang that rivaled Hell’s Angels. The lyrics of the track are written from the perspective of Ramos’ cousin, a biker who went to jail, got out, and turned his life around. It’s about taking risks, getting second chances. It’s about family.

“Salsero” also tells a personal tale with bigger resonances. Pieced together from different song ideas from Navarro, the band’s bass player. Half Puerto Rican and Half Salvadoran, Navarro is, in the words of Happy Sanchez, “the original salsero”. The song is a tribute to Navarro, a song written by friends and for friends that reflects the internationally Latino and wide-spreading roots and influences of the band.

“This World is Made for Lovers”, with a strong Chicano/Latin rock flair, nods toward War and Tower of Power. The undeniably groovy “Funky Cha-Cha” does just what you’d expect and gets a crowd moving, sometimes even leaping up on stage to execute a perfect cha cha cha. The mix of Latin styles and feels, the storytelling and the rock ‘em-sock ‘em energy all reflect the band’s vision and love the unique culture of the Mission District.

Because, above all else, the Hip Spanic Allstars are a Mission band. “No one thought we were going to go beyond our first live show together a few years ago. But it was so fun that everyone said, let’s keep this thing going,” recalls Sanchez. “And if we’re going to do this as friends, let’s do it as friends.” Friends doing us a favor, bringing the Mission party back to all.